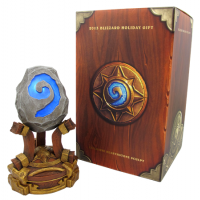 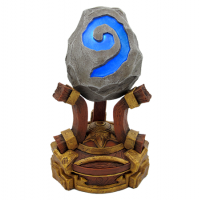 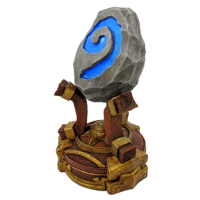 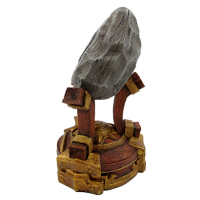 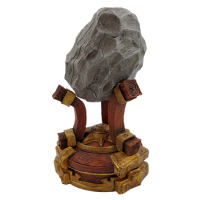 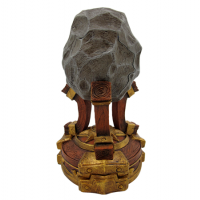 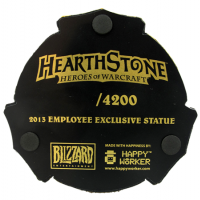 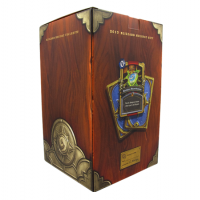 Blizzard Entertainment – giants in the video game industry and creators of the iconic Diablo, StarCraft, and Warcraft universes.

There’s no other way to put it – we love Blizzard! We’re always thrilled when we get the chance to partner up and create an amazing new collectible. With all the great characters and relics the Blizzard universe has to offer, the toy design possibilities are exciting and endless!

Every year, Blizzard shows their appreciation for all their employees’ hard work and contributions by surprising them with an exclusive gift. For the 2013 holiday season, Santa dropped something really exquisite down the Blizzard offices’ chimneys…

Hearthstones are items carried by all players in World of Warcraft that enables them to transport back to a home base aka a home inn. It’s also the “cornerstone” of the newest Blizzard game, a free-to-play strategy card game called Hearthstone: Heroes of Warcraft. The Blizzard team wanted to celebrate the launch with truly authentic replicas that looked and glowed like the real thing (transportation powers not included, of course)!

These epic polystone sculptures were individually numbered and included a hewn wood-style base to display the Hearthstone, with hidden magnets to securely hold everything in place. Plus, the Hearthstones were designed not only to be visually stunning, but also fully functional! A hidden compartment in the back of the Hearthstone contains batteries and a switch to activate the stone’s blue glyph, which lights up in a cool pulsing pattern. A perfect way to celebrate both the holidays and Blizzard’s newest game!

After Blizzard created a vision for the Hearthstones, we collaborated with their team and partnered with “stonemason” (a.k.a. sculptor) Ehren Bienert to create a digital model. With the new 3D printed parts, Blizzard’s sculptor Brian Fay added some final hand touches. Then a worthy paint master for the stone and base was created together with Jason Wires.

While working hard at our toy “grindstone” tweaking design and engineering for production, we also designed the electronic components to give the Hearthstones their pulsing blue glow. After some tinkering and programming (and a lot of testing!) to get the glowing pattern just right, thousands of tiny circuit boards were printed and ready to move into their new homes. And finally, all merry “milestones” were completed!

The Hearthstone replicas were crafted and shipped to nearly a dozen locations around the world and distributed to each and every staff member, quickly becoming “touchstones” for the team. As Blizzard employees began excitedly posting their new loot to social media platforms, blogs and gaming sites picked up the story, spreading equal parts of excitement and envy among fans!

Holiday gift from #Blizzard. We won't have it until Jan.. but my entire team's mind is BLOWN. Real life #Hearthstone. pic.twitter.com/rThma0gHEF

Blizzard employees are getting a pretty awesome @PlayHearthstone gift this year in their stockings http://t.co/1eTQA4EBsL

Hearthstone holiday gift is amazing! So fun watching both game and community grow from the Blizzard side of things. pic.twitter.com/YLzvLPtsb9

<3 my #Hearthstone. Was a holiday gift to employees celebrating @PlayHearthstone. pic.twitter.com/8jUTZqvm7Y

Blizzard's belated holiday gift was definitely worth the wait, my very own Hearthstone!! pic.twitter.com/3Uprl5dP5a

Our employee-only holiday gift is so cool! So glowy! Plus, you can hold it! pic.twitter.com/AcFiFDYqRm

The buzz is BIG around here. Stellar work. I say it often, but I truly love Happy Worker and all that you do.

Designed by & Distributed by: Activision Blizzard

Made with Happiness by: Happy Worker