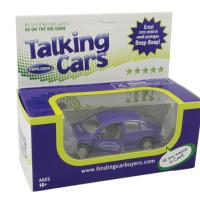 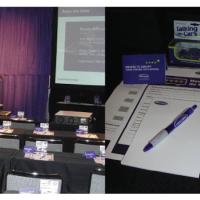 Shoppers confidently rely on Cars.com to find the best set of wheels. Each month more than 13 million car shoppers visit Cars.com to find the right used or new car, check out reviews, use comparison tools, and tap into trustworthy research and advice. Auto dealers also know it’s the best place to connect with buyers and ultimately sell more cars.

When developing the ad for the 2011 ad campaign, with its introduction during the Super Bowl, Cars.com decided to showcase its expert and consumer reviews. In the new “Talking Cars” ad campaign, a group of realistically animated talking cars discuss how they’ve been reviewed on Cars.com. More than 111 million Super Bowl viewers were reminded that “Confidence Comes Standard” with Cars.com during the most watched television event ever.

While the ad campaign would speak directly to consumers, Cars.com also wanted to drive this message home with their auto dealers. This meant developing a very special gift for dealers to keep in their offices and on their desks. Nothing would do but a bona fide Talking Car – one that brought the Super Bowl ads and Cars.com brand to life.

Enter Carl, the Talking Car: a souped-up, collectible die cast car. Carl was designed and created to represent the main car-character in the ads. When you press a button, Carl comes to life, flashing his headlights and speaking his mind: “Hey guys, the reviews are in on Cars.com”, “This review says you've got great handling”, “At Cars.com, confidence comes standard", and “Honk Honk.”

As Carl’s window box packaging reveals, he’s a special kind of car: “At 3 inches long this car is great at fitting into tight parking spaces. He’s a lot more outspoken than other models. Carl’s eco-friendly – runs entirely on ‘play power’.”

Cars.com worked with Happy Worker to lay out the best specs for the talking die cast car. As timelines were tight and the Super Bowl ad creative was still in development, the teams worked quickly to design a car that would appear generic in make and model so that it could be branded exclusively for Cars.com.

Happy Worker got to work recording & engineering Carl, the Talking Car’s sayings and tooling the voice chip – thanks to our creative collaborators Adam Sproule and his voice styling, and our friends at Phanta Media for their solid-as-always sound production! In the meantime, Happy Worker developed a packaging template and Cars.com’s design team created Carl, the Talking Car’s home: an eye-catching window box.

One of the engineering challenges was fitting a speaker inside Carl’s tiny 1:64 scale car body, and then extracting the best quality voice playback from a smaller-than-usual speaker. With a combination of tweaks to the sound files, hardware and car insulation, Carl was soon talking clearly & confidently.

After finishing production, packaging and quality testing, Happy Worker managed logistics for the order out of two warehouses. Most of the toys landed in Chicago the day before the 3rd largest winter blizzard on record. This also happened to be just a few days before the Super Bowl and Cars.com’s most important conference of the year (National Automobile Dealers Association, aka NADA).

Happy Worker managed distribution to hundreds of reps and partners across the USA. Happily, key shipments arrived just in time for the NADA conference in San Francisco and the Super Bowl in Arlington, TX. Texas was also experiencing record ice and cold and the special Super Bowl delivery of Carls arrived just a few hours before kickoff.

While the Packers and Steelers were the ones on the field, our combined teams scored our own game-winning toy touchdown at Super Bowl XLV!