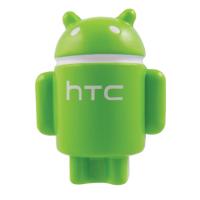 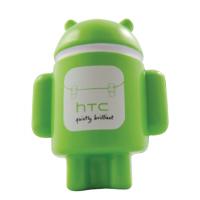 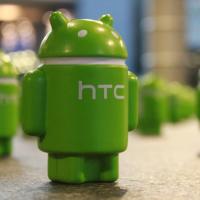 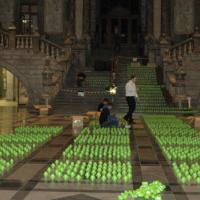 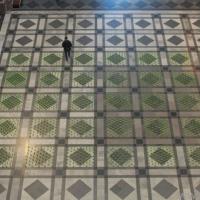 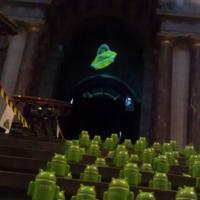 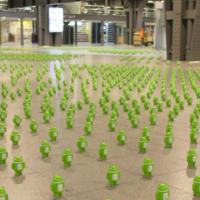 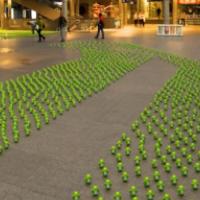 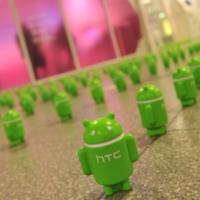 HTC’s drive to innovate begins with its smartphones and tablets, and endures through the company’s marketing strategy and partnerships. Enter Out of the Crowd, HTC’s innovative marketing & PR partner. Nestled in the suburbs of Brussels, Belgium, Out of the Crowd creates stand-out results for HTC and other global IT and technology brands. Their passion for making complex technology understandable - and their strength in tailoring long term marketing strategies - makes Out of the Crowd an integral partner in HTC’s communications planning.

Working hand-in-hand with HTC, Out of the Crowd’s latest undertaking was to introduce and launch HTC’s newest suite of Android devices in an extraordinary way. After setting their happy phasers on “stun”, the team set out to reach hundreds of thousands of consumers and hundreds of media outlets, and to get people talking. To accomplish this challenge they needed a truly unforgettable experience… 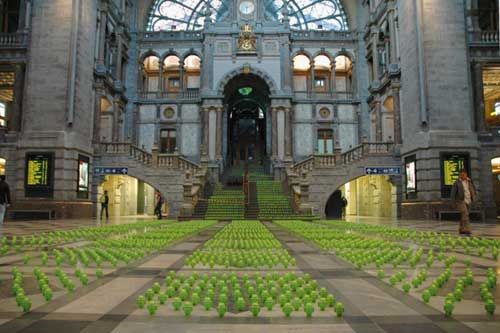 Each and every morning, billions of humans wake up and head to work. And for the most part our commutes are, sad to say, uneventful and boring. But on a certain morning in Belgium, people awoke to find that their world had changed.

It was an invasion.

At the crack of dawn, an army of 30,000 cute little green HTC Android robots had landed and were marching through the main train stations in Antwerp, Brussels, and Namur.  After the initial shock of being surrounded by an alien army, mankind realized with relief that it was a benevolent invasion. The adorable toy Androids had come in peace to announce HTC’s newest out-of-this-world mobile devices.

Then, humans turned the tables on the alien invaders, and abducted thousands of the HTC Androids to bring back to their own homes and workplaces.

After discussing HTC’s goals with the Android invasion, we looked at different types of toys. Together with HTC and Out of the Crowd, Android stress toys (aka stress balls, squeeze toys, squishy toys or stress relievers) were chosen as the best fit for the Invasion’s experiential marketing campaign. 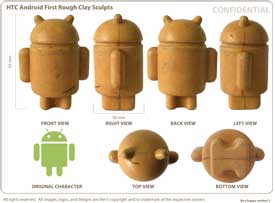 Every happy invading Android army begins with its first recruit – or, in this case, the toy prototype. After quickly planning an expedited toy making schedule we started designing. Creatively we wanted to bring the cute Android character to the stress toy medium as authentically as possible. This meant making the right design compromises for best toy engineering. Plus at a basic level, positioning 10,000’s of toys is no easy task... so the Androids had to stand impeccably.

Out of the Crowd and HTC followed up with rocket speed approvals throughout the collaborative prototyping process. Around the same time, 3D & video production company Holomedia began to launch pre-invasion teaser videos and develop 3D projections of spaceships emerging from the ceilings of the train stations that would show in the days prior to the launch. With anticipation growing, Happy Worker crafted the final prototype and with its approval, went to work creating the loveable toy army and safety testing the toys.

The flash toy mobs were set up during the wee hours of the night. Each of the 30,000 Androids were placed by hand in the stations’ halls, stairways, main lobbies, and concourses.

Commuters didn’t see it coming. every one of the thousands of green Androids was quickly adopted within a few short hours, creating a memorable experience around HTC and Android.

The HTC Android Invasion was a huge success. At the crack of dawn spaceships filled with HTC Androids landed in Belgium and marched through the 3 largest train stations in the country. The cute armies of HTC Android toys created a playful extraterrestrial experience and colorful visuals. Within a few hours all the Androids had been adopted, and within a few days the campaign had earned hundreds of media mentions and counting.

The HTC Androids are already collector's items. We get requests from around the world. Mon Jun 13 17:45:41 via Tweetie for Mac

Memories of the happy HTC Android invasion is now locked in the memories of thousands of commuters, not to mention the tangible permanent reminders thanks to the 30,000 HTC Android toys lovingly adopted into homes and offices.

The HTC Android toys have become hot collectors’ items, with HTC and Android fans both within Belgium and from every other continent writing & asking to get their hands on them.

Creatives know it's "easy" to have a big idea - but real success only comes from great planning and execution. All kudos to HTC's and Out of the Crowd's teams for their remarkable work on a super fun & groundbreaking launch. Happy Worker had the easiest job – all we had to do was make cute toys!

Happy Worker brainstormed with us, using our & our client's goals as the starting point for the toy design. As a result, the Android toys accomplished the goals AND exceed everyone's expectations.

Many thanks again... it truly was a great pleasure working with you!

Bart Van der Leenen, Managing Director
Out of the Crowd

The Androids are so much better than we could have dreamed them up to be. The quality is excellent. Thank you so much for the excellent, happy service!

Erica Engelen, Marcom Specialist
Out of the Crowd