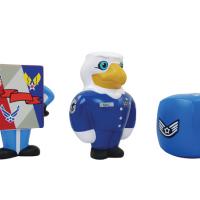 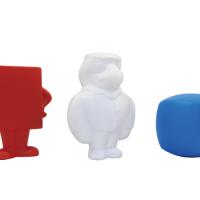 Each year, thousands of enlisted U.S. Air Force personnel seek to take on greater responsibilities and earn a new stripe. To do so, they must score well on an exam based on the Professional Development Guide (PDG). Enter, McMillan Study Guides; the happy team behind the popular self-study guides for progressive, career-minded airmen.

McMillan is serious about helping enlisted Air Force members earn their stripes — and serious about having fun, too! Along with software, manuals, flashcards, audiobooks and mobile apps, McMillan has developed more than a dozen highly addictive software games. Each game features original, Air Force-inspired characters and challenges to reinforce information and provide airmen with well-earned study breaks.

McMillan dreamed of bringing their most popular game characters — Mac the Eagle and the PDG — to real toy life. They also wanted to support the Fisher House™ Foundation, an organization that provides for military members and their families in times of need. Not to mention, McMillan continually looks for new ways to engage and reward their loyal customers.

Mac the Eagle
McMillan’s likeable mascot and game hero. This Chief Master Sergeant boasts an outstanding eight stripes and represents all courageous Air Force personnel. He does not flinch in the face of the Professional Development Guide (PDG).

Professional Development Guide (PDG)
The most feared book in the Air Force (and in McMillan’s study games). During each testing cycle, this sneaky character aims to stress out airmen and thwart their promotion.

Lucky Stripe
Although not an official game character, Lucky Stripe is the spark plug for enlisted Air Force members. The sides are imprinted with the top five rank insignias (E-5 – E-9) and the McMillan logo to keep airmen motivated for that next stripe!

McMillan approached Happy Worker with character designs for the would-be stress relievers. Collaborating with McMillan’s designer and animator, Troy Bargatze, minor modifications were made to ensure durable engineering in stress foam and to finalize relative sizes of the three toys.

With approved design tweaks, prototyping began. First, a clay model of each character was sculpted. Once happily approved, each model was converted into a durable hard resin model. These resin models were used to make the metal molds that cast the final foam stress relievers. Finally, Happy Worker painted each character and added graphics and logos to create a finished set of snazzy toys. Along the way, we made a few quick sculpture and paint tweaks to better capture the nuances of Mac’s daring and mischievous expression.

How can I get the McMillan Collectible Squeeze Toys?

Visit McMillan's website to order your very own Mac, PDG or Lucky Stripe. Throughout the next year, 100% of profits are donated to the Fisher House™ Foundation.

We did our homework and spoke with several manufacturers. Happy Worker wasn’t the cheapest toy maker – but they were the best. They were hands-on with design recommendations and exacting with product quality.