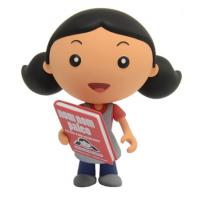 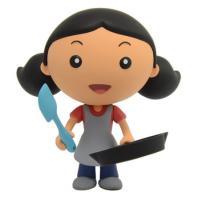 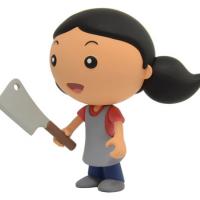 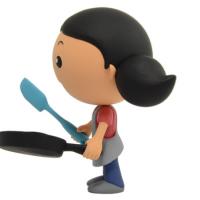 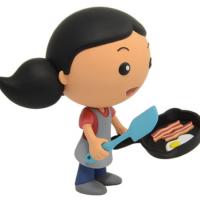 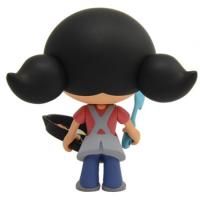 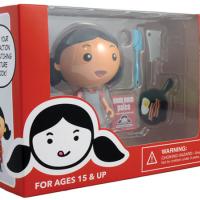 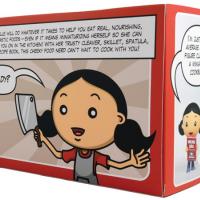 The husband and wife team of Michelle & Henry have been blogging about their paleo culinary adventures since 2010, and with hoards of loving fans and hundreds of tasty recipes, in 2013 it was time to launch a cook book - the ultimate nomtastic collection of family-friendly recipes for cavepeople (or just humans).

To help launch the book and immortalize the uber-cute illustrations that adorn the blog and the book, Happy Worker was asked to create a designer vinyl figure in the likeness of Michelle. The vinyl figure would be accompanied by real-life Michelle's fave tools of the trade - her Nom Nom Paleo cook book, a skillet of eggs + bacon, a spatula, and her trusty cleaver.

The packaged vinyl figures would travel with Michelle & Henry around the world to be gifted on the Nom Nom Paleo book tour, and would be made available to fans, to add a little toyful fun to their kitchens.

Nom Nom Paleo started by created "turnaround" illustrations of Michelle and her accessories from several angles. That was easy, knowing how much great digital art Nom Nom Paleo had created for the blog and the cook book.

Happy Worker went to town digitally sculpting the toy, working in Zbrush. With Nom Nom Paleo's feedback we tweaked the design, to capture Michelle's look juuuust right, while engineering the pieces to play nicely together as a toy.

We molded and casted several copies of our rapid prototypes - one to make our master tooling for the rest of the toys in the order, and the other to paint up to ensure that the colors we had chosen for the toy looked perfect.

Henry had fun putting together the graphic design for the box that toy Michelle would live in, while Happy Worker finished off prototyping + production set-up.

Now it was toymaking time! Happy Worker produced the order of toys and shipped 'em out to California, where Nom Nom Paleo would start their book tour and get the rest of the toys ready for distribution. We hope Michelle isn't creeped out that so many of her "mini mes" are now out in the world. :)

Honestly, the process with Happy Worker was amazing -- you guys are incredibly easy to work with, and a pleasure to interact with, too. The figures are great!

Where to Buy the Food for Humans Cookbook

Where to Buy the Michelle Vinyl Figure