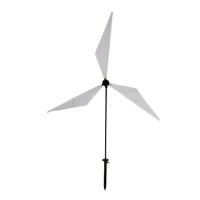 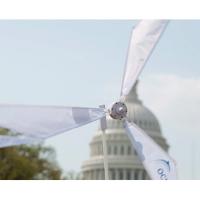 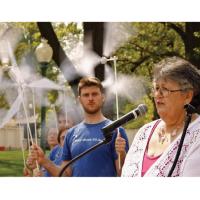 A global leader in ocean conservation, Oceana brings together scientists, economists, lawyers, and advocates. In just a short decade since Oceana’s founding, it has enabled dozens of vital victories for marine life and habitats, representing a new hope for the world’s oceans.

Oceana’s campaign for clean energy sources like offshore wind was made all the more imperative in April 2010 when the Deepwater Horizon oil rig exploded. Hundreds of millions of gallons of oil poured into the Gulf of Mexico, becoming a tragic example of the risks of offshore drilling to oceans and their ecosystems.

To mark the one year anniversary of the Deepwater Horizon oil spill, Oceana planned reenactments of the oil spill in DC, the Carolinas, Massachusetts, and Florida. These events were to become a visual reminder of the risks of offshore drilling while publicizing a real alternative to offshore drilling - offshore wind energy.

Blowin’ in the wind… are the Oceana Lawn Wind Turbines. Standing 3.3 ft (102 cm) tall, these scale model windmill designs are inspired by their gigantic, real life brethren. The Lawn Wind Turbines’ blades are crafted from kite nylon, with a fiberglass turbine tower, and come with a detachable lawn stake.

Due to the inventive nature of these windmill-turned-turbines, Happy Worker tapped our unique Imagineering Service to research, design and test initial prototypes. Together with Oceana we developed a winning final concept that best met the event goals.

Oceana actively provided offshore wind inspiration and ideas, graphics, and info on the oil spill anniversary event plans, while Happy Worker created an assembly guide for Oceana organizers who would be putting together the turbines before events. Happy Worker also handled package design and managed logistics for five locations across the East Coast.

The first batch of Lawn Wind Turbines happily arrived at the doorsteps of Oceana organizers the week before the Gulf Oil Spill anniversary. During the April 20th events, the Lawn Wind Turbines served as playful and powerful symbols for clean energy alternatives.

The Lawn Wind Turbines worked amazingly and helped us get great press coverage. Thanks so much for all your help, you've really gone above and beyond :)