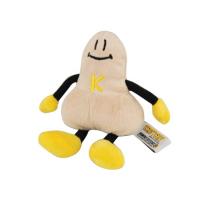 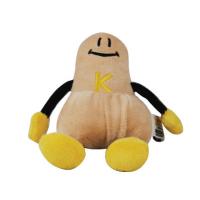 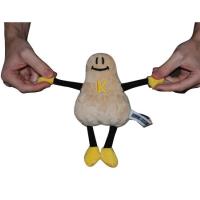 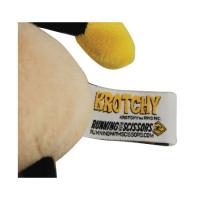 Running With Scissors (RWS) is the studio behind the best selling Postal® video game universe, including Postal, Postal 2, the Postal film, and the eagerly anticipated Postal 3. Krotchy™ is Postal’s most exclusive and elusive character, and part of a running gag throughout the game.

In Postal 2, players are sent on a mission to get a Krotchy Doll… which is sold out everywhere in the town of Paradise, AZ. They’re forced to get creative at a toy store or they’re stuck with Krotchy’s unloved companion – the seriously crappy Larry the Crab toys.

RWS wanted to immortalize the impossible-to-get Krotchy as limited edition plush beanie dolls. The toys were created to reward their fans, add even more cool RWS merchandise, and provide a soft reminder of the Postal universe leading up to the release of Postal 3. The Krotchy Dolls were then sold through the RWS web store and used as gifts at gaming industry events like E3.

Krotchy is best described as a cartoon scrotum. He’s smiley, he’s cute, and when given a weapon he kicks some butt.

We could say more and insert a bunch of fun scrotum-related innuendos. But we’ll let the photos of the finished Krotchy Dolls say it for us.

Running With Scissors created turnaround control art of Krotchy from several angles. Working with the studio’s design team, Happy Worker made a few design adjustments before beginning on the Krotchy prototype. Several different fabrics tested, and Krotchy’s stuffing to bean ratio was adjusted to help give the doll the right cuddly-yet-floppy feel.

Next, embroidered tags were proofed and finalized just as prototyping of the doll finished up. And then… it was doll making time! Photos of the prototype were used on the RWS web site to encourage pre-orders of the dolls just in time for Black Friday and Holiday gift buying.

Happy Worker managed logistics and the order arrived to RWS offices in Arizona for shipping to Postal fans across the globe.

As revealed by the Running with Scissors web site, the Krotchy dolls are “Half plush, half beans... ALL BALLS!”

Working with Happy Worker was a great experience! They got the humor which helped during the entire design and development process. Krotchy dolls have been flying off the shelves!