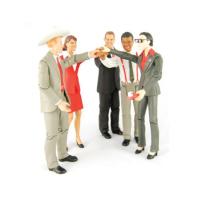 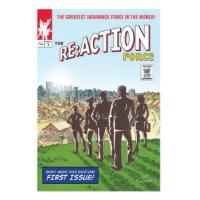 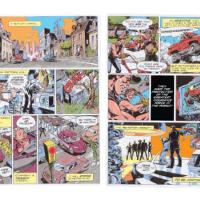 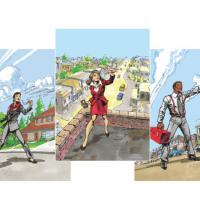 Methodologie and their client, Safeco Insurance

Safeco Insurance was just completing a year long outreach with its independent insurance agents, who recommended improvements to help them sell Safeco's products. In response, Safeco and Methodologie, their advertising agency, were managing a series of company wide product launches, all designed from the recommendations from their agents. They wanted an exciting way to thank and reward their agents, while at the same time communicating the changes they were making through their new product launches.

Safeco's Re:Action Force, a line of 5 heroic insurance agents and action figures, was created, one for each division of Safeco's business:

Each action figure was packaged in a custom polybag, along with 2 accessories and a base. The toys were accompanied by a their own trading card, a Re:Action Force comic book and supported by online web sites, web comics, and marketing materials.

Methodologie developed the campaign and led all creative, with Happy Worker in a supporting role. We worked with Methodologie to design the custom action figures, illustrate (pencil, ink, letter and color) the original comic book and illustrate the trading cards and online comics. The action figures were shipped to Safeco's warehouse in the Seattle area, and deployed one character at a time over a 10 month span, so that each of Safeco's divisions had their own opportunity to communicate their new and improved product lines to the agents.

Each Re:Action Force action figure was handed out personally by Safeco's sales and marketing staff to their more than 10,000 independent insurance agents across the US. Because they were distributed one character at a time, their agents were kept in suspense, eagerly awaiting each new sales visit and heroic new arrival. The campaign was a big hit with Safeco and their insurance agents, built excitement around each new product launch, and proved a fitting response to the year long outreach and communications.

When Methodologie saw our toy concept illustrations, they asked if we'd work with them on the illustration work in the project - including a comic book, trading cards, web comic strips, and some animated introductions. With several comic-crazy types on our team, we readily agreed.

To keep with the retro superhero theme, each illustration was created the old-fashioned way akin to the 60s and 70s world of comics - almost everything was done by hand. The feedback? "Looks amazing! They love the illustration!"

As with any project, there were a number of engineering challenges. The most challenging engineering component for this project was a lasso accessory for Agent Van Fleet, a heroic insurance agent who hails from Texas. While other accessories were created digitally using CAD rapid prototyping, the lariat required a more hands-on approach. After going through a dozen different hand sculpted models, we finally had one that we felt had the right balance of form and function… and were able to rope up the final design and start production.