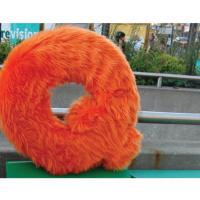 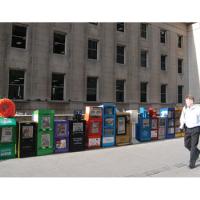 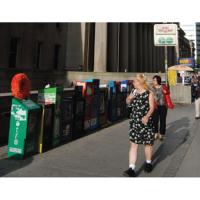 Promote the hit Broadway show, "Avenue Q", and its launch in Toronto through an unusual, grassroots campaign.

Large orange fuzzy Q's were created and attached to Metro newspaper boxes at key commuter locations, as part of a city-wide scavenger hunt.

Happy Worker designed and fabricated several large fuzzy Q's from a variety of materials (including the fuzziest orange fun fur available), which were tested for outdoor all-weather performance. We also engineered and built the attachment for the Metro newspaper boxes, and helped with installation.

Unusual Fuzzy Q's magically appeared at key transit locations in Toronto for the week long campaign, and were exposed to as many as 250,000 commuters each day. The city-wide scavenger hunt not only generated more website submissions than previous campaigns, it also created a lot of fuzzy fun in the process!

The people at Happy Worker were not only exceptionally enjoyable to work with, but they intuitively were able to design and build a product that exceeded my expectations.

People walking by a Fuzzy Q

Avenue Q has won 3 Tony Awards, including the award for Best Musical. Not bad for an adult-themed puppet show.

While in public, the Orange Fuzzy Q's were petted, cuddled and enjoyed by many. They also survived a severe thunderstorm and numerous attempts to hijack (or Q-jack) them for people's homes and offices.

When the Qs were nearly complete, it became obvious that their funkyness and fluffy orange fuzz would be a target for vandalism. We strengthened the engineering so it was more secure, yet still able to be installed by one person. The Q's were also removed from the public eye at night. Consequently, no Q's were harmed during the making of this campaign.